Home Vintage Down on the Farm: Vintage Pin-up Girls From the Hay Days
Vintage

For many pin-up artists that worked in the first part of the 20th century, a farmer’s daughter caught in a seductive pose was a staple in their repertoire of work. While cities were still growing and attracting more younger folk, Norman Rockwell and his portraits of rural American living were the standard go-to image in magazines like The Saturday Evening Post and Boy’s Life. Thus, the default image of the girl next door for many males was that of a young lady who knew her way around a barnyard. And there were a lot of pin-ups that featured beautiful women plucked from their daily farm chores.

The American farm girl pin-up embodied the romantic appeal of the old west, the salt of the earth authenticity of being relatable to everyone that put in a hard day’s labor, and the sex appeal of the good girl image. These pin-ups may not have gone to university but they believed in the principal qualities of American life: what you saw was what the person was, with no pretense of guile or subterfuge in her womanly qualities. She was the kind of girl that you took home to meet your folks but could also give you a mischievous smile when Ma and Pa weren’t looking your way. 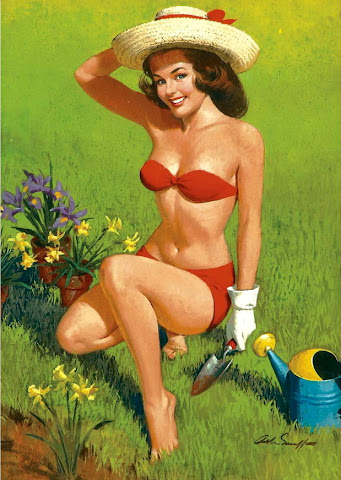 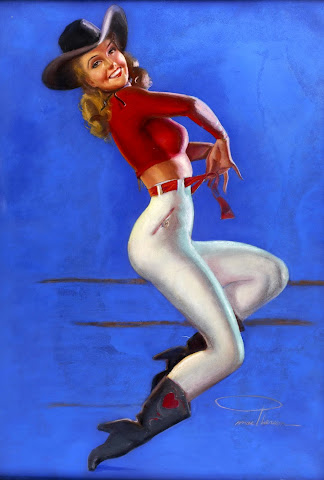 A Roll in the Hay

While some of the pin-ups that featured the farming gal were good natured and could be called fully wholesome for family values, there were an equal number that went more suggestive. Whether the pin-up girl was wearing skimpy farm grubs, a button-up shirt tied at her belly button, or laying back in a saucy pose on a bundle of yellow hay and locking eyes with you, this was playing on that same good girl trope and adding the hint of adult sexuality into the mix.

What followed in the moment after that lovely farmer’s daughter reclined her head down into the soft hay? What did she have in mind when her upturned gaze met yours as the polka-dot top she wore came undone?

Isn’t that the impression these next three pin-ups are giving to the viewer? 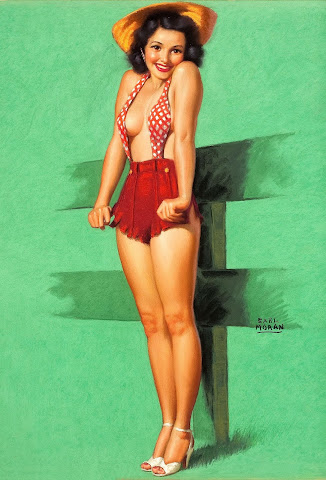 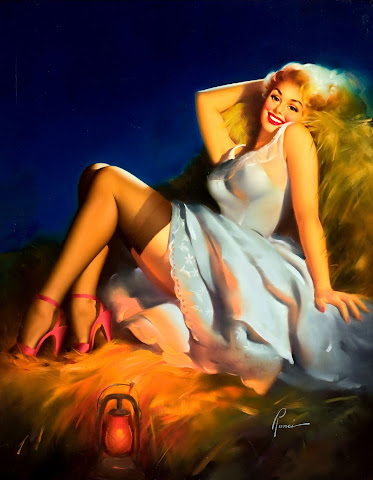 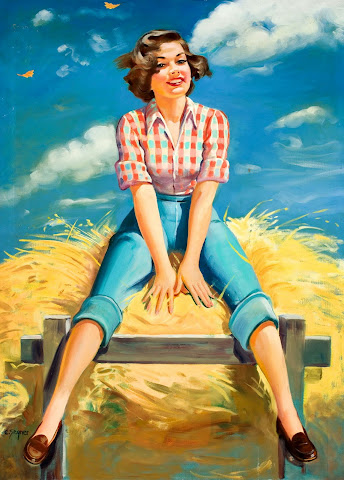 Life on the farm and in someplace where wide open spaces could be found were also incorporated into the farm girl pin-up motif.

Horseriding and equestrian activity added another dimension of suggestibility to the scene. The pin-up could be imagined as a seasoned rider, perhaps a lady that competes professionally to the cheers of the crowd. In other pin-ups she could be an amateur, someone who owned a horse since she was a little girl and still to this day goes out for the occasional ride.

You may have also gotten a sense from a pin-up painting or two that the subject lent her labor to the farm. There may not have been any pin-up girls milking a cow or cleaning out the “road apples” from the stable but there were some showing her doing chores and farm maintenance. 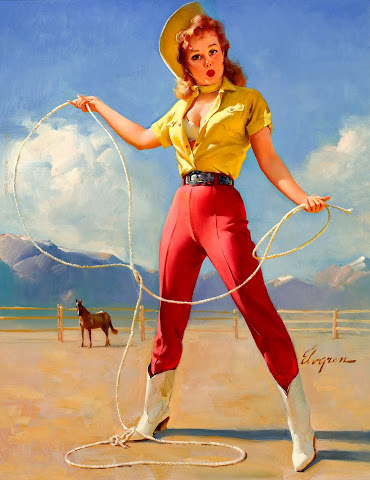 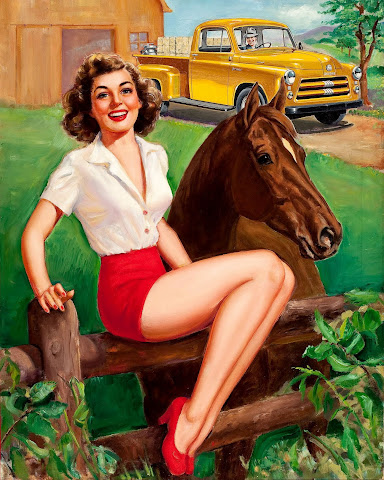 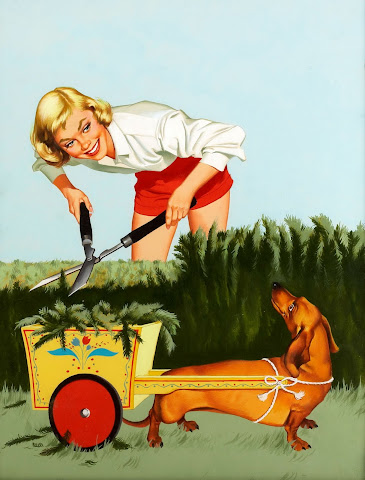 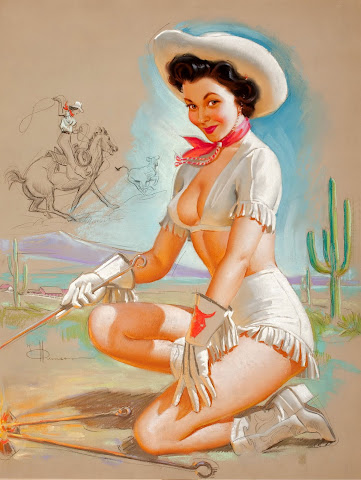 Legs That Go On and On…

Full-length jeans or slacks were just as common on these pin-up beauties as a pair of shorts. It was more rare to find a pin-up girl posing in a longer skirt unless she was wearing it as part of a show.

Bear in mind that this was in an era where pin-up artists couldn’t make an excuse to show a lot of a woman’s upper leg and thigh region. By having their pin-up subject be engaged in an everyday activity needed at their homestead, the artist could get away with the woman wearing those short shorts. And so they did. 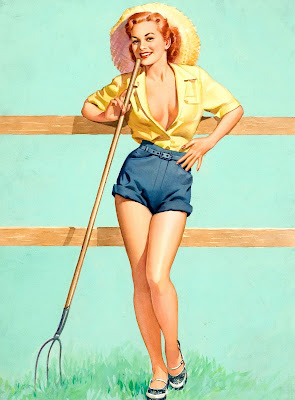 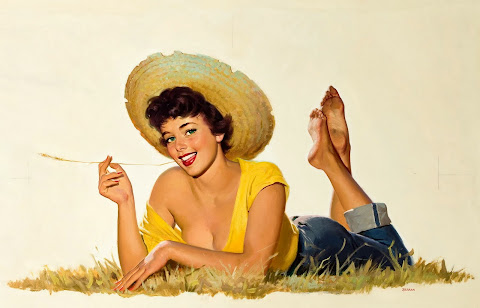 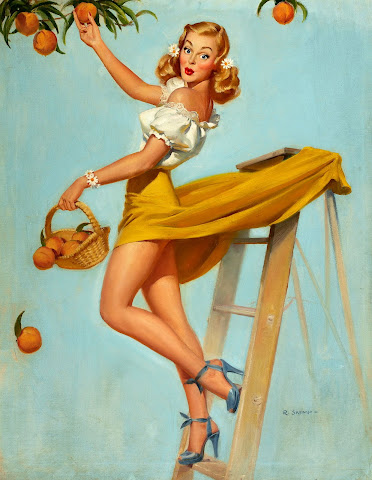 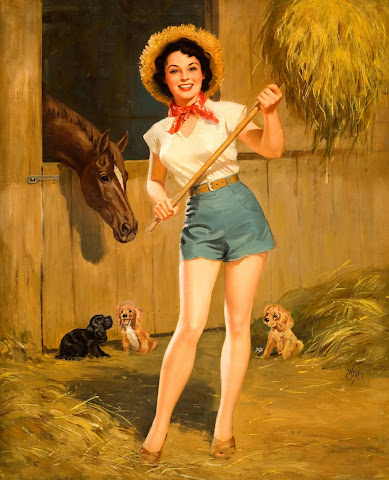 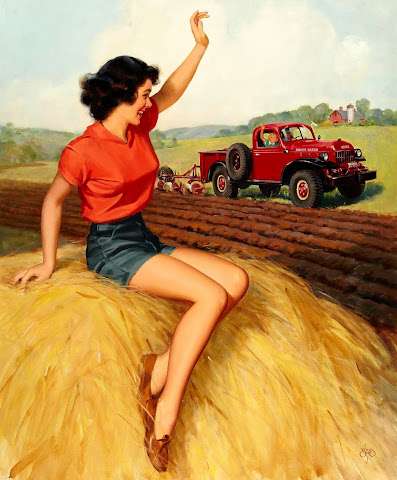 The era of the classic farmer’s daughter pin-up started coming to an end in the 1950s, replaced by pin-ups featuring women from urban walks of life. You can still see the legacy of this pin-up girl in the occasional photo shoot and every now and then men’s magazine pictorial, but for the most part it’s something from a bygone age. Perhaps it was the pin-up girl of choice of your grandfather’s generation, but the timeless beauty of this style of pin-up is still there retained in these classic paintings. 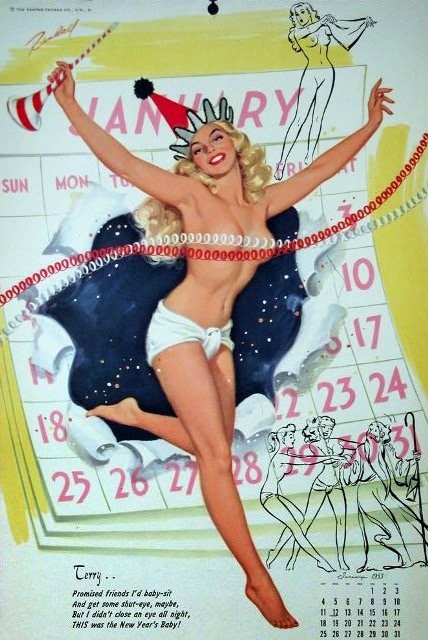