The Pin-ups of Overwatch

Since its release in May 2016, Overwatch has proven itself to be a popular video game for fans to create original pin-up artwork. For those of you unfamiliar with the gameplay, Overwatch is a first-person shooter that has two teams of six players competing in squads in maps. Each character has its own unique skills and abilities, allowing for the teams to use strategy to beat the other squad in combat.

An estimated 35 million people play Overwatch as of October 2017.

Originally there were 24 characters introduced, of which about half are female. Let’s have a look at some of the best Overwatch inspired pin-up art that’s been created so far.

One of the more popular of the Overwatch ladies is the character of Widowmaker. Amélie Lacroix is a French assassin, married to another Overwatch team member. When she was captured by enemy agents, Amélie was reprogrammed and sent back to her husband. She killed him in his sleep. Now completely dark, she was further trained in killing techniques. Her skin color is a light blue due to her heartrate slowing down, a result of her terrorist training.

Real name Angela Ziegler, Mercy was a Swiss medic and one of the game’s good guys. She is an advanced medical scientist, creating a winged combat suit called the Valkyrie and a staff that can heal injured teammates.

During the Overwatch demo period, Mercy proved to be one of the most popular characters. Her visual appeal comes from the character’s ability to take flight, providing Mercy with great dramatic moments.

Mei as illustrated by Kilart.

A Chinese climatologist, Mei-Ling Zhou has a cryogun that allows her to shoot blasts of icy energy, which she can freeze opponents with, or to erect defensive barriers to protect herself and teammates.

Another very popular character in Overwatch, Mei has also received her own animated short which delves further into her character’s motivations, to find a solution to the planet’s climate changes.

Tracer by Will Murai

Tracer is argurably the game’s most popular character. Her power is technological; she has two pulse pistols that allow her to disrupt the flow of time, rewinding it back three seconds or leap forward.

Tracer is also notable in that she is a LGBTQ character; in the game’s storyline, Tracer has a girlfriend named Emily.

Pharah from Overwatch, illustrated by Nindei.

The daughter of one of the founders of Overwatch, Fareeha Amari is an Egyptian security officer. She is armed with a combat suit that features heavy rockets for offensive tactics. The power suit also gives Fareeha the capability to make massive leaps in the air.

The tattoo surrounding her right eye is based on the Eye of Horus, an Egyptian deity.

South Korean esports champion Hana Song was recruited by the army for her hyper-accurate skills. Known by her nickname D.Va, Hana pilots a combat mecha equipped with heavy armament and the capability to deliver a defense matrix that can inflict great damage on her enemies.

The character of D.Va is likely so popular because she brings together the concept of a professional gamer-turned-mecha pilot. Right there that’s probably 90% of the target audience’s dream girl.

As a professional weightlifter, Aleksandra Zaryanova wanted nothing more than to break world records. When her homeland of Russia was threatened by the omnic crisis, she turned away from professional sports and enlisted in the military so as to best protect her people. Now she fights for the forces of good using a particle cannon and graviton surge ability.

In several Zarya pin-ups many artists focus on her musculature. This specific intrepretation of Zarya is able to present both her brawn as well as her facial beauty in equal measure.

Satya Vaswani was taken from street poverty at an early age and given a chance to be trained by the Vishkar Corporation. Under the codename Symmetra, the now-adult Satya uses the hard light technology given to her by her corporate masters and uses it to fulfill the best interests of Vishkar.

With more characters being added to the Overwatch roster, as well as new seasonal themed skins for existing characters, there will likely be a long shelf life for more pin-ups. If you play Overwatch, what’s your favorite character and her style of look?

Credit for Widowmaker pin-up at top of page: ZumiDraws. 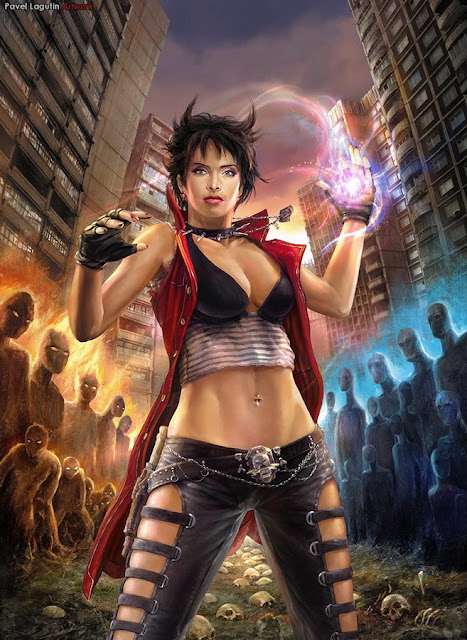