Countries of the World as Pin-ups

Back in 2010 artist Bill Presing collaborated with fellow artist Josh Cooley and the duo created a series of 54 illustrations, each depicting a different country of the world as a pin-up. Dubbed the “54 Intercontinental Beauties”, Presing and Cooley’s pin-up series personified each nation in a lighthearted manner. They weren’t meant to be taken as serious representations of a land, but used stereotypical traits that people of the world may have held when associating a mental image of that particular nation.

So nobody should get hard feelings over seeing their homeland as a pin-up, OK? Well, who could when you see what their takes on the countries of the world looks like…

We wanted to focus on the playing cards of just one of the two artists, so for that reason we’re showing the pin-up cards that Bill Presing made for the deck.

The playing card pin-up for Norway is based on the Norse mythology of valkyries, the warrior women that stand guard at the realm of the afterlife and block those unworthy to enter its lands.

Medusa is the pin-up choice for Greece. It looks that she can straighten her hair, but it’s a but of a bitch to do. The eight of hearts is probably a good choice for Medusa’s card.

Scotland is best known for its whiskey, engineers, golf courses and bagpipers. About the only place one could expect to encounter a topless bagpiper is as art in a pin-up playing card deck.

A few of the pin-ups chosen weren’t of recognized countries, like the one above for the International Space Station. This may very well be the first time a pin-up artist made a creation for the ISS.

Here is what the original deck of Intercontinental Cuties playing cards looked like back in 2010:

According to Presing’s Instagram page, he’s working now as a story artist at Pixar. When he’s not at his day job, Bill also moonlights drawing covers for comic books.

We would love to see a re-issue of his and Cooley’s Intercontinental Cuties playing card set. If word comes down and we hear about it, we’ll pass it on to you! 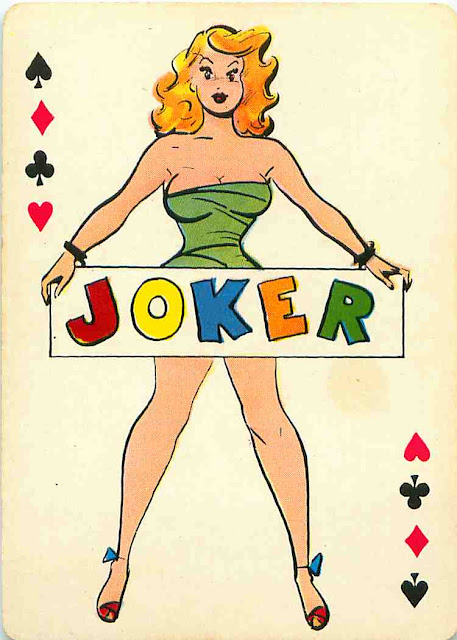