When the sultry lounge singing Jessica Rabbit first appeared in 1988’s Who Framed Roger Rabbit?, the world of cartoons and of pin-up women collided head-on.

If your typical pin-up model had the curves of a highway, then Jessica Rabbit was an entire interstate of roadwork. With her half-closed come hither eye gaze, her sparkling sequined crimson cocktail dress, and her mane of red hair that flowed around her head like a siren’s locks, Jessica was every cartoon guy’s dream girl. And, judging by her popularity since the thirty years since her screen debut, with a lot of pin-up artists as well.

Do a Google search and you’ll see how popular Ms. Rabbit still is. Better still, if you visit any one of the major comic cons and walk the floor, you stand a good chance of encountering a Jessica Rabbit cosplayer, like so:

In reality, the cartoon Jessica was a mixture of several real women. Betsy Brantley was hired by Walt Disney to provide the performance modeling of Jessica while on the set for the live film scenes. Brantley’s figure was drawn over in some scenes, while in others a combination of string manipulation and clever practical effects made it appear that Jessica was really interacting with her flesh-and-blood co-stars.

Richard Williams was the head of the film’s animation department when Who Framed Roger Rabbit? was in production. Shortly after the movie’s release, Williams was asked by The New York Times which real life counterparts Jessica Rabbit drew inspiration from.

”It’s the ultimate male fantasy, drawn by a cartoonist. I tried to make her like Rita Hayworth; we took her hair from Veronica Lake, and Zemeckis kept saying, ‘What about the look Lauren Bacall had?’ ”

— Richard Williams in an interview from 1988

Early illustrations by Richard Williams of the Jessica Rabbit character turned out to match very close to the final on-screen result.

Jessica Rabbit continues to be a source of inspiration to many pin-up creators who saw the movie in their youth. Which brings us full circle back to the main pin-up of Jessica up top…

Sakimi Chan is the artist whose Jessica Rabbit we’re featuring at the top of our page. Chan is a Canadian artist who’s popular on DeviantArt with her scores of drop dead gorgeous anime and manga-influenced illustrations. 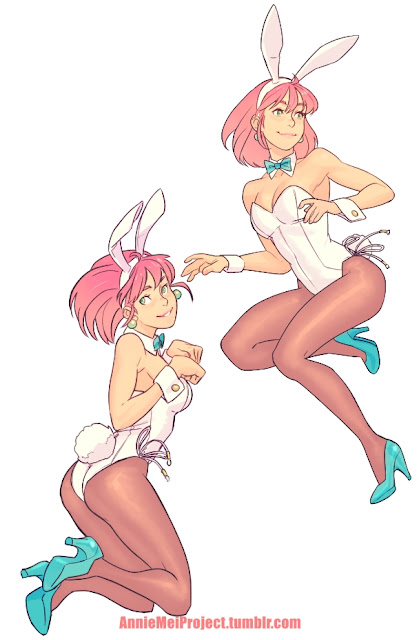